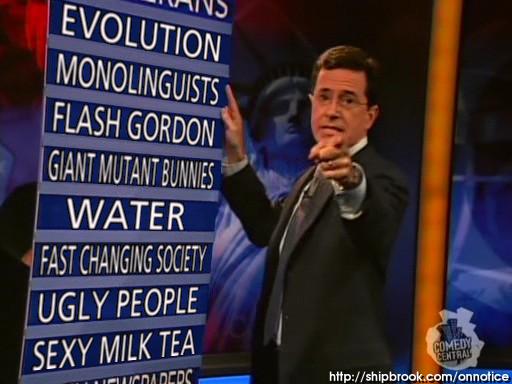 Stephen Colbert is not a fundamentalist zealot--he just plays one on TV. He's also not an economist, or a politician, or a scientist, but he has the ability to look right through specious arguments of these people and skewer them to humourous effect on basic cable television. His victim last night was Michael Behe, the grand poobah of the Intelligent Design movement. Behe was on Colbert's show plugging his new book, which better minds than mine have already torn to shreds (here and here, for instance). Behe's a jovial sort, and he seemed relaxed and in his element; after all, Colbert had said twice that all he wished to do was agree with Behe that God had created the universe in its present form. Behe apparently has never seen the Colbert Report. He launched into his tired (and repeatedly discredited) mousetrap analogy--that even a simple mousetrap is useless if one of its parts is removed, and so is an example of irreducible complexity.

Colbert is not an athiest--he famously teaches a Sunday School class at his church--but he's also not a fool. When Behe stated that dismantling a mousetrap would leave only a wire, a spring, and a block of wood, Colbert gave exactly the right response: "And of course we know, none of those things is even remotely useful." This gets right to the heart of the problem with irreducible complexity. Even if it is true (and it usually isn't) that some complex structure or metabolic pathway won't work without all its components, it doesn't mean that those components are useless in and of themselves. For instance, one of the favorite targets of the ID crowd is the bacterial flagellum, a structure seemingly so complex that it can't possibly work without all the parts. However, recent study indicates that parts of the flagellum are identical to mechanisms used by some bacteria to attack others. In other words, the flagellum was put together out of parts of other mechanisms being used for unrelated purposes. It should be obvious to any idiot that the individual parts of a mousetrap have other uses. It was obvious to Colbert; it wasn't obvious to Behe.
Posted by Archaeopteryx at 8/03/2007 07:06:00 AM

Hi, great post on the show. Didn't you love how Behe finally admitted that Intelligent Design is really just the believers in God fighting back. I also wrote about the show at The Primate Diaries.

Maybe this isn't possible currently, or maybe ever, but I'd really like to see a map of the genetic mutations in DNA that lead to the development of specific systems. In other words, given two similar species, one with function X and one without function X, I'd like to see a map of how you can go from the DNA sequence of the first species to the DNA sequence of the second, with any intermediate DNA sequences being sufficiently beneficial to be selected for. Does anything like that exist?

I've really got nothing much to say, except that I love your post on the show! Dawkins was awesome on TCR. He could explain every question Colbert had without a second thought, but Behe got frazzled by even the easiest questions.

People are starting to look at exactly that kind of question, but it will be a while yet before we're able to do it with humans (I think there just isn't enough computing power and sequencing data to do such work). However, people have done experiments with HIV and bacteria, and are able to plot out exactly which changes are required to go from one group to another (when multiple changes are required).

Check out ERV for a decent layman's writeup.

Thanks for the comments, all.

Kev, the Factician is correct. Because most genomes are insufficiently mapped, it's difficult to compare gene sequences for specific traits across species. However, this has been done in a cruder form for many years--we can trace the evolution of genes from species to species--we just don't always know what the genes code for.

When genes are traced from species to species, are intermediate results available? For example, if you determine that 20 or 30 sequence mutations are needed, is there something like a flowchart mapping out how all of these mutations were accomplished, and how each mutation was beneficial to the organism? If so, can you link to it?

As far as I know, no, such a detailed analysis hasn't yet been done. Also, it would be pretty much impossible to say how an individual mutation would be "beneficial" for the organism that has it. It's perfectly possible--likely even--that many of the mutations would have originally been neutral. For instance, a lot of new genetic material begins with duplication of genes--you end up with more than one copy. From then on, you can have mutations in the copy, without harming the original gene.