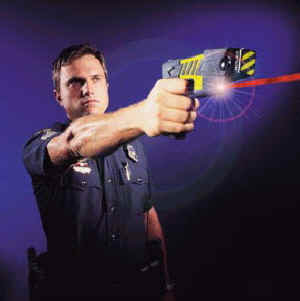 A federal judge has imposed limits on police use of tasers. The court sided with a man who claimed that the use of a taser by a police officer constituted excessive force. The taser attack left the man with broken teeth and a taser dart embedded in his arm.

The scary part of this article is that it mentions in passing that taser attacks were responsible for nine fatalities in just the Sacramento area. In other words, tasers allow police officers to act as judge, jury, and executioner, often simply because citizens are acting a bit strangely. Tasers are sold to police departments as a method of "non-lethal" control; clearly, this is untrue. Even if police officers could be trusted to use tasers only when they're called for (and they certainly can't), tasers often have deadly effects. Better that cops use guns, since they presumably know that gunshots are possibly fatal.

Don't you think, though, that generally the choice is between a taser and something more lethal? I guess police might use the taser just because they have it, and they might be more inclined to continue talking to someone and trying to calm them down if they didn't have the taser. But between a taser and a pistol--or even a billyclub--it seems like the taser is preferable. The issue of taser fatalities is definitely troubling, but perhaps that is really an issue or proper training.

It would be nice to have something like "set phasers on stun", but anything that disables a person has the possibility of killing them, if only because they might hit their head upon falling down.

By the way, I just finished a book called "How We Decide" by Jonah Lehrer. Very interesting book.

I mention this because it would interesting to do a study (if it hasn't been done) of when police think they ought to use the taser versus other alternatives.

Hi, Kev,
The court ruling was that tasers were much more painful (and potentially lethal) than other means at most officers' disposal--in other words, a perp is better off with a knock or two from a nightstick than being tased. My own thought is that the tasers are sold by the taser company as being non-lethal, when they're not. Good cops (and, yeah, I know there are some) might mistakenly think that tasers are safe, and kill someone with them.

As an aside, I know a guy here in town who's mentally ill, and in trouble all the time. He's routinely tasered by the cops, simply because they don't like him, and they can get away with it. He describes the experience as excruciating. He's in poor health (as you might expect from a semi-homeless mentally ill guy with no health insurance) and I'm afraid (as is he) that he's going to be "accidentally" tasered to death.

Here's hoping that this will, indeed, bring some sanity into this otherwise baffling new trend.

I tend to think that the prevalence of tasers is a trickle down of that idea that we should "be afraid, be very afraid" that George W. Bush introduced us to in 2001.

Its one of those subtle (if you're not actually BEING tasered) shifts of power and privacy away from the individual and toward the government.

Hmm... I wonder if part of the issue is that people (including police officers) understand "non-lethal" to mean "incapable of lethality." I think that I agree with KC on this one, and that it might be an issue of training, and really understanding the tool.

By the same token, I wonder if police training does enough to ensure that officers don't place themselves in dangerous situations as often.

I dunno, Artie. Because tasers are used by any number of police agencies of every size and type, it's difficult for me to see it as part of an evil trend. On the other hand, I don't agree with KC and Aaron that it's only a matter of training. My problem is that, without really thinking about it, we've decided that it's okay for cops to use an excruciatingly painful device to corral evildoers. There's no judge, and no jury--just administration of punishment.

I guess my point would be that devices such as Tasers should be thought of as "less lethal" (that is, less lethal than firearms) rather than as "non-lethal" and that the police should be trained accordingly. That means, both in terms of when or when not to use such a tool, and in how to use it when use IS appropriate.

I also note the apparent frequency with which Tasers are used on the mentally ill -- not just in situations where they pose a serious threat to others, but simply where they are acting irrationally and not responding to the officers' commands with the desired level of acquiescence.

Locally, we have had cases of individuals with other medical conditions - for example, someone having an epileliptic seizure, being tasered.

Hi, TP--nice to see you around.

I'm beginning to think of tasering as more of a civil rights issue. Tasering is more than a way to subdue unruly people--it's excrutiatingly painful. I don't think that police should have the right to inflict that sort of punishment on people without some sort of due process. Of course, cops are going to have to subdue wrongdoers sometimes, and sometimes they'll have to use force. The thing is, they're not allowed to beat the holy shit out of someone in order to subdue them (of course this happens, but supposedly when it does, the cop will get in trouble). Why should they be allowed to inflict a ridiculous amount of pain onto someone who hasn't been convicted of a crime? It's legalized police brutality.

That is an interesting point Arch. In fact, I am fairly certain that our legal system would not permit use of tasers as punishment of offenders convicted even of heinous crimes....

and yet they are OK on young children or old ladies who give lip to a rude young patrolman.

An emergency blanket will shield you from taser attack. You can even tape it into the lining of your coat. It's aluminized mylar, only costs a dollar, and works by shorting out the taser.