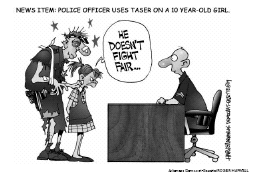 My "local" newspaper, the Arkansas Democrat-Gazette, has one of the most awful, right-leaning editorial pages one could hope to find. It includes the folksy blatherings of Paul Greenberg, the incoherent ravings of Bradley Gitz, and a selection of unedited, apparently unscreened, often racist and homophobic letters from the Demozette's faithful readers. Despite the goofy rants always found on these pages, the worst features are almost invariably the political cartoons. One artist in particular, a person named Michael Ramirez (a selection of his crap can be found here), should probably win a Pulitzer Prize in the Category of Unsubtle Illogic and General Stupidity. However, today, the Demozette has outdone themselves. They ran a political cartoon by their own artist, Roger Harvell, that seems to be supporting the police officer who tasered a ten-year old girl. That's right. Apparently, according to Harvell and his paper, if a child is unruly, or won't do what mom wants, it's okay to call in a police officer to taser the young ruffian. Clearly, the only way an adult police officer may possibly subdue a child is with 50,000 volts of angry electrons. If you had any suspicion that the editorial staff at the Democrat-Gazette was not insane, this should lay it to rest.
Posted by Archaeopteryx at 11/20/2009 01:16:00 PM

Ye gads. I read about this story. I kept thinking: Dude, she is 10 years old!

That's really what a police officer, trained (I assume) at a Police Academy and being an adult, and kind of a guardian of the peace needs to do to encourage a 10 year old to take a bath?

What kind of crazy world are we?

Are you kidding? That was one tough little girl! Can't you see the bandages? (Look at the bones!)

I feel confused and offended at the same time.

And if it's any consolation, I believe the creator of "Mallard Fillmore" is a local of where I grew up.

When I first saw the story it occurred to me the policeman's first duty would be to remove that child from the home, it being occupied by a woman who could think tasing a child would ever be appropriate. Remove the child to Child Protective Services (assuming Arkansas has such a 'service') and file a report recommending conflict resolution and family therapy for the mother. Instead what do we get? Or more accurately what does the child get? A peaceofficer with a similarly truncated horizon to the mother and five thousand volts in the neck! Jesus.

Ooops, that thing about the unfunny conservative cartoon duck appears to be completely untrue. How embarrassing.

I can't imagine that any thinking human being would think tasering a 10-year-old is a good idea. That's why the newspaper cartoon is so shocking.

But, Arkansas is one of the few states left where it's okay for teachers and school adminstrators to beat children. So, maybe it's just a logical extension.

Why does Arkansas hate children???

i recall the outrage when a DC metro cop handcuffed a little girl for eating a french fry. yet, tasering a 10 yr old for not taking a bath does not seem to have generated similar outrage. is it out there and i just missed it?

It's Arkansas, Twif. Here, you're allowed--no, encouraged--to beat your children to make them do what you want. Schools are still allowed to beat kids. So tasering them is just the next step.

By the way, the cop involved was fired yesterday--not for the tasering, but for not following proper procedure in having done so: here's the story.

On the other hand, I would have thought that, in Arkansas, refusing to take a bath would be considered a right, if not an obligation......