Why Obama Won the Debate 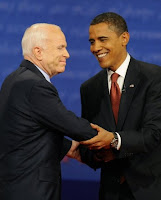 Immediately after the debate was over, I thought that Obama had probably forced a tie, and that since he was leading in the polls, and McCain's recent behavior could charitably be described as erratic, that a tie translated to a win for Obama.

Imagine my surprise Saturday morning when I read the news sites, to find that all the focus groups, and many of the pundits, had declared Obama the winner. And not even a close winner, but winner by a large margin. While I'm thrilled to hear it, it took me a while to figure out why.

And then it hit me. People are desperately hungry for change. Recent polls have shown that the current administration has an approval rating of 29%. But voters barely know Obama. The Right Wing Noise Machine has been extremely busy painting Obama as a risky, inexperienced neophyte, and, you know, a black guy, absolutely unready to serve as president. Friday night, Obama showed up in a business suit instead of a track suit, he didn't speak in rhyme, and he demonstrated a wide knowledge of every subject that he was asked about. In other words, he's a perfectly acceptable candidate for president. And he's not a Republican. He hasn't spent the last eight years voting for every important Bush program, and indeed, campaigning for Bush.

In other words, Obama won the debate because the American people desperately needed and wanted him to win the debate.

Winning debates and winning elections are two different things. Last time out, the polls showed that people thought John Kerry won the debates, but that did not translate into victory on Election Day. Even though McCain did manage to get close to a tie for a while there, Obama has huge structural advantages. If Obama loses, it would be one of the greatest upsets in electoral history. But then, Oregon State did beat USC, so who knows.

If Obama wins, I won't cry about it, and I'll hope for the best, and I'll pray for him every day. But, I can't help thinking that Obama really doesn't have much to recommend him for the job. His lack of experience isn't a Republican talking point, it's a simple truth. Out of those 10 or so Democrats in the early debates, every one of them had more relevant experience than Obama. Obama is sometimes compared to JFK, but JFK had significantly more experience, both through military command and from a much longer tenure in Congress.

Maybe he'll be a great President, but as an American, I find his inexperience worrisome.

Hi, Kev. I agree to a certain extent that Obama is inexperienced--it's part of the reason that I orginally supported Hillary when it got down to the two of them. But I think it's much more important to have a president who is on the right side of the issues--the economy, the war, the environment, and so many others. Besides, anything is preferable to the specter of Potential President Palin.

McCain is the scary one. I would take inexperience over bullheadedness any day. Palin being his choice for VP is proof that he just wants to win - it's not about being a good president to him.

Obama seems to sincerely want to put the country on track. Biden was a good choice and I have hope that he will choose more good people to surround and advise him.

4 more years of the last 8 is not an acceptable choice.

Amen to that, Sona.

I agree that the issues are more important than the experience. I wouldn't vote for Obama regardless of his experience. It just strikes me as curious, considering that any Dem would have been a prohibitive favorite in this race, that the party chose Obama, the least experienced candidate in either party by a wide measure. You had Dodd and Biden, two old-style liberals who have been standing up for decades for their beliefs. You had Bill Richardson, former Congressman, former Secretary of Energy (a rather useful knowledge base at the current moment) and now a governor. You even had Dennis Kucinich--a nut, but an experienced nut. Not to mention Pantsuit Lady. You had all these people who probably would have won (well, maybe not Kucinich). So, why out of that group pick the guy you don't really know? It's like the Dem Party as a whole did with Obama what McCain did with Palin--pick someone you really don't know and hope for a pleasant surprise.

Several years ago, my company used to sell educational shareware disks. They cost $5 each, and most of them were pretty straightforward: math, spelling, history, word processing, etc. There was one disk, though, that we just labeled as 20 miscellaneous educational programs. That disk was one of our bestsellers. It occurred to me that people figured that if they didn't know what was on the disk, maybe it was something really wonderful, so they paid their money and took their chances. They felt a little bit of excitement in the unknown.

I see the same thing in Obama. He hasn't been around long. He hasn't made any tough decisions or taken any unpopular stands. He's not responsible for the present troubles because he's not responsible for anything. If you need someone to vote "Present" he's your guy. He's been in the Senate for 4 years, but 99% of the people who support him couldn't name one piece of legislation he has sponsored. All the other Dems running for President had long records and would have been predictable. The Audacity of Hope isn't Obama's book, it's his whole reason for being in the race. It's like a national game of Let's Make a Deal. America has seen what's behind door number one and door number two; those things were okay, but just imagine what might be behind door number 3!

On another note: I've read online that the Goddard Space Center and some other gov't agencies are saying that 2007 was one of the cooler years on record in a long time (since 1930). Have you seen that? I wasn't able to find much information about this on the Internet, so maybe it's not accurate.

Obama has something that most politicians have lacked for a number of years--he's inspiring. When you listen to him speak, he makes you believe that it's possible to change the world. Even an old cynic like me gets it. Biden, Richardson, Dodd--they represent the old guard. Even Hillary to a certain extent. Obama's "lack of experience" is what makes him attractive.

2007 was the second warmest year on record, according to the Goddard Space Center:
http://data.giss.nasa.gov/gistemp/2007/