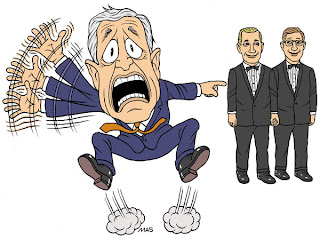 With all the ruckus about Iowa, Maine, and Vermont legalizing gay marriage, it's a good idea to go back and check the results in Massachusetts, where gay marriage has been legal for five years now. MSNBC has done exactly that. Long story short: the world hasn't come to an end, society hasn't collapsed, and straight people aren't being forced to gay marry. All that's happened is that some people in committed relationships have been able to make their associations legal. In other words, the experiment has been a success. It's time for the other 45 states, and the federal government, to follow suit.
Posted by Archaeopteryx at 5/10/2009 10:25:00 AM

Although the prospect of it in Florida seems shamefully slim.

Perhaps it's time that gay couples began moving to states that value them?

I understand to urge to make home the way you wish it, but sometimes the best way to change your home is to leave it. States that find themselves loosing population, and the businesses that serve them, will start to see that discrimination doesn't pay.

Aaron - I agree. I hate to see gay friends of mine have to deal with the ridiculous bigotry of this place.

Sad commentary, though, for anyone to feel that they HAVE to leave a place. We're so big on choice and freedoms here.

Nah. We're close enough now that gay folks need to stay and fight. Can you imagine having even five states that allowed gay marriage just ten years ago? It's an idea whose time has come.

Yep. I think we are acheiving critical mass here, and as it becomes unavoidably apparent that the society is not falling apart in those states that do allow same sex marriage, that hetero marriages are not being destroyed, it will be harder and harder for the hold-out states to maintain their opposition.

Fuck, even Utah Republican governer Huntsman is saying that Utah at least should provide for civil unions with the same legal rights! Of course, now that it appears he will become Ambassador to China, that idea is probably temporarily dead here.....but even the LDS-owned news media are starting to sound like it is just a matter of time.

Point being, unintended consequences don't always show up right away. Sometimes it takes a while. And it hasn't even been five years in the majority of the states.

One thing I would like to see shake out in the states with gay marriage is, just what is the impact on religious liberty? There have already been lawsuits brought by gay couples against others who don't want to be part of their activities due to religious beliefs. It would be nice to see whether some reasonable accommodations can be made between religion and gay marriage in the five states before having the issue go nationwide.

President Obama at Notre Dame talked about how we have to bear each other's burdens. I don't want any more burdens placed upon gay couples than is necessary, but I also don't want further burdens placed on people who don't agree with gay marriage. The idea that all opposition to gay marriage is based on bigotry doesn't bode well for civil discourse, or for the kind of compromise that is necessary in a pluralistic society. One could do worse than to read President Obama's Notre Dame speech for a lesson in how one should not presume evil about one's ideological opponents.

If your religion is such that you can't accept gay marriage, that's great--don't accept it. But one of the great things about the United States is that you're not allowed (at least theoretcially) to use your religion to trample other people's rights. If that's a "burden" for you, I'm comfortable with that.

I see where California's Court is upholding the unconstitutional Proposition 8.

And ditto on Archaeo's comments to Kevin Clark.

Yeah, people are weird, but you gotta love MSNBC. Lets hope for more freedom and progress in this country.